The circuits which follow assume prior knowledge of the 555's basic operation.  This has been covered adequately by other sources so there's no point in me repeating it.  One good treatise is by Tony van Roon.

The first three circuits are applications of the 555 which are not very well known, although the first one does appear in some manufacturers' data sheets.

In Fig.1 it is used in an astable configuration which gives an automatic, and fixed, 50% duty cycle. Simply stated we are reversing the roles of pins 3 and 7.  The C charges and discharges through the same R, so the charge and discharge times are the same.  Note that this works excellently with the CMOS version but not too well with the bi-polar one.

You can take an output from pin 3 or 7, but a pull-up resistor at pin 7 may, or may not, be necessary depending on what you want to do with the output. 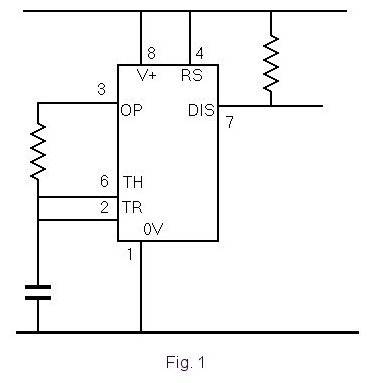 Fig.2 is a variation of Fig. 1.  The C now has completely independent charge and discharge paths so the duty cycle can be set to whatever figure is desired, from much less than to much more than 50%, by suitable choice of the two timing Rs.  When power is applied to this circuit the C has to initially charge from 0V to 2Vs/3, whereas subsequently it charges from Vs/3.  The first output pulse of a series is therefore longer than the following ones.

Fig.3 is another astable configuration.  In this variant there are two CR circuits.  The one on pins 6 and 7 control the time for which the output is high.  That on pin 2 controls the time for which the output is low.  As they are totally independent the duty cycle can again be chosen to be any desired figure from very much less than to very much more than 50%.  In this arrangement the left-hand C always charges from 0V to 2Vs/3 so the first output pulse is the same length as the subsequent ones.

This is another variation which allows adjustment of the duty cycle between 5% and 95% by means of the pot.

(A suggested answer to a forum site question.)

At switch-on, if the doors are closed (and the switches open), it will give an output for around 15 seconds, determined by the CR on pins 6 & 7.  If any door is open at switch-on it won't give an output until the last door is closed.  Any subsequent closings (of the last door) will produce further outputs.  But note that if a door is opened before the end of the 15 seconds the output will switch off because pin 4 will be grounded. 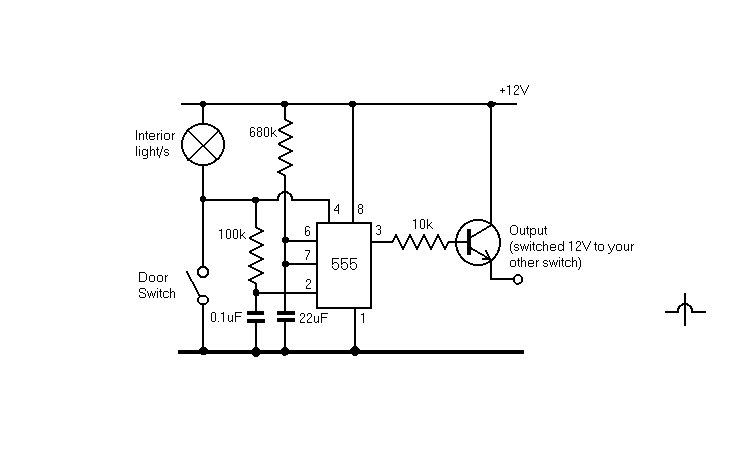 A variation of this (below) is posted for Alex (30th May 2003) in reply to his question on ezboard projects.

With the door, and therefore switch, closed the chip is held in its reset state.  when the switch opens the reset is released and the chip is triggered (because there's initially no charge on the 0.1uF so pin 2 is at 0V).

You can adjust the values of the timing C and R to give the period of your choice.

A frequently encountered problem with the monostable configuration is that it will often produce an unwanted output when the power is applied.  This can be overcome by connecting a C from pin 4 to 0V and connecting pin 4 to the positive supply through a resistor.
This holds the chip briefly in the reset condition until the C has charged up.

The transistor on the trigger pin inverts a positive-going input to trigger the mono.  The relay will be energised for 5 seconds.

If you want the relay to be normally energised but de-energised for 5 seconds wire it as shown to the right.